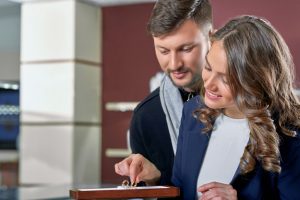 Moissanite has been commercially available for about two decades now. In the jewelry industry, it has always been marketed as a substitute for diamonds. Charles & Colvard (then C3 Inc.) exclusively offered the gem, but the company’s monopoly on its production and distribution ended after its patent expired in 2015.

Since then, more and more businesses have shown interest in manufacturing moissanite jewelry items. This had closed the gap between its supply and demand. In turn, you now have a better chance to buy a moissanite engagement ring and avoid the diamond’s steep price tag. But does this mean you’re cheap, and you don’t love your partner enough to save for the “real thing”? Not necessarily. For many reasons, moissanite is an excellent choice for a ring. These reasons include the following:

Moissanite Has Better a Sparkle than Diamond

Compared with diamonds, moissanite has the superior refractive index and fire and dispersion values. On a sunny day, a moissanite ring produces an impressive amount of refractions that would catch the attention of many people. With more sparkle, your would-be bride would turn a lot of heads and get the adulation she deserves. So, if you want to be smart about your wedding budget, buying a moissanite engagement ring is the right direction to take.

Moissanite Lets You Save for the Marriage

Buying diamonds isn’t as practical as it used to be. For the longest time, marketing diamonds involved telling people they were rare. This was to justify its outrageous price. More consumers, however, are becoming more aware that it’s far from the truth. Buying a moissanite ring allows you to save a huge amount of money you could use for your future life together as a married couple.

The engagement ring is the symbol of your love, but your fidelity and commitment to your partner outweigh the value of any piece of jewelry. If you think a diamond would be a financial burden, go for moissanite instead.